Practicing classical Japanese karate in a safe and collegial setting.

The Charles Fink Karate Dojo: Part of a larger community

When joining this Dojo, you become part of a community of like-minded people who enjoy each other’s company a few times per week and it is our hope that the skills and friendships you develop here will last you a lifetime. What you may not know is that being a member of this Dojo also ties you in to a much larger world – a world that extends far beyond the comfortable confines of 3000 Falconbridge Hwy.

The Dojo, and by association, you, belong to two major karate groups: our style association and our sport association. 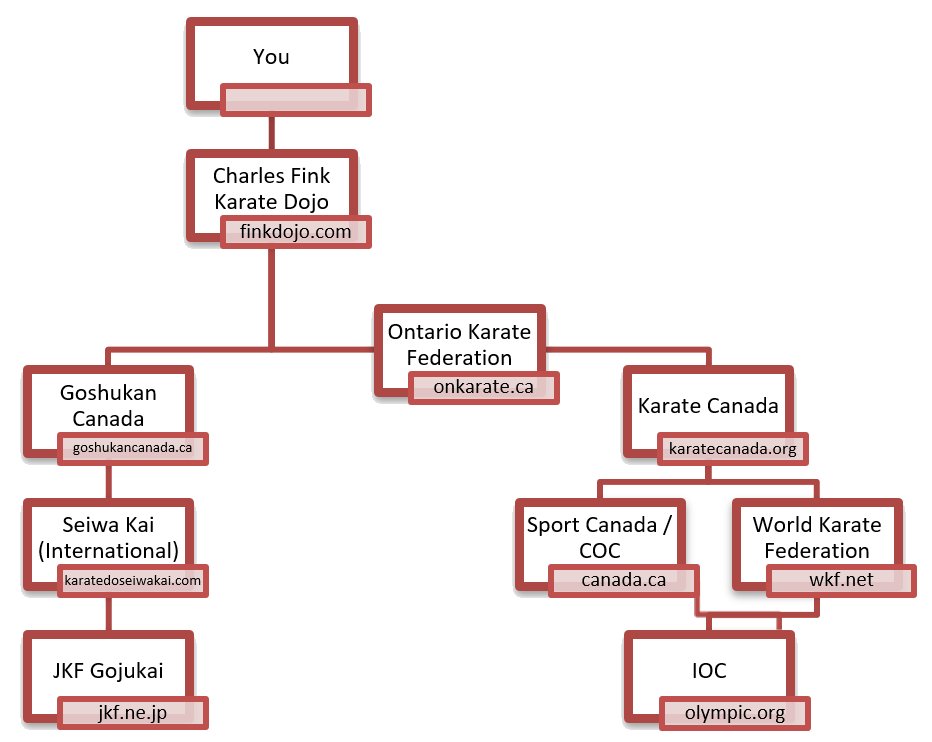 The style of karate that we practice is called Goju Ryu . A number of Goju dojos throughout Canada have combined to form a group called Goshukan Canada and train together under one flag. Goshukan Canada is a member of an international group called Seiwa Kai under the guidance and direction of Seiichi Fujiwara Sensei of Japan. The Seiwa Kai is a member of the Gojukai branch of the Japan Karate Federation (JKF). This affiliation ties us into the cultural roots of karate and ensures our authenticity.

We also practice the sport of karate and as such are members of the provincial sport governing body for karate in Ontario – the Ontario Karate Federation (OKF). The OKF is recognized by Karate Canada, the national governing body under Sport Canada and the Canadian Olympic Committee. Internationally, Karate Canada is recognized by the World Karate Federation (WKF) and the International Olympic Committee. It is solely through the OKF that Ontario karate athletes can aspire to compete at the Olympics.

At the end of the day, your main relationship remains with your Sensei. But is important to know that your Sensei does not operate in isolation. Through your membership in the Charles Fink Karate Dojo, you have access to a tremendous wealth of knowledge, experience, events, and activities that will help enhance your karate experience.

Other Blog Posts
« Karate is a Martial Art
Some Nice Imagery »